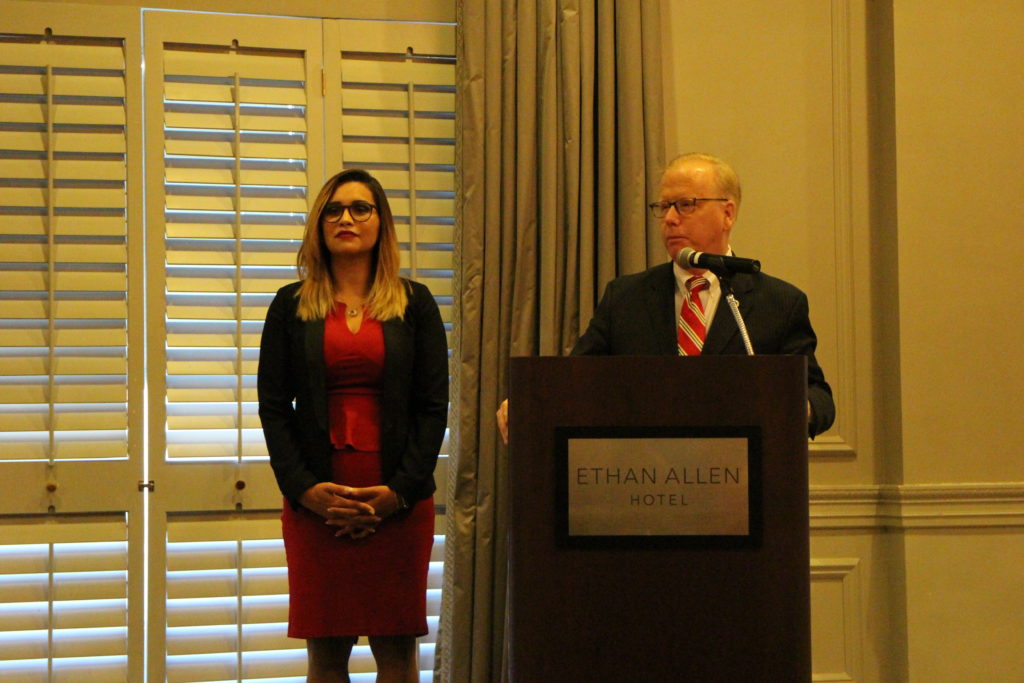 By By Emanuela Palmares

In the definition of the American Dream written in 1931 by James Truslow Adams, a Connecticut native, he says that the dream should feel like “life should be better and richer and fuller for everyone, with opportunity for each according to ability or achievement” regardless of social class or circumstances of birth. The American Dream is rooted in the Declaration of Independence, which proclaims, “all men are created equal” with the right to “life, liberty and the pursuit of happiness.”

The New American Dream Foundation 501(c)(3) organization, created to serve as the philanthropic arm of Tribuna Newspaper, was created to celebrate that pursuit with the American Dream Awards and Scholarship Gala.

A pursuit that gives birth to a new meaning of the American dream emerges through the life of each immigrant that comes into a country, from those who arrived at Ellis Island or those who arrive through JFK.

Through our Lifetime Achievement Award, we remind our community of whose shoulders we stand on by celebrating the life of people like Americo S. Ventura, the son of Portuguese immigrants, who returned to his hometown of Danbury to begin practicing law in 1957, continuing to do so for the next 60 years and helping countless immigrant families along the way.

Or Mr. Anthony Rizzo, who migrated to United States as a young child during World War II, sent by his widower mother with his sister on a ship to sail 5,000 miles across the ocean to live with his uncle in Danbury, CT. In 1962, he founded Rizzo Companies, with one truck and two employees, which would become an empire, known for its generosity to the city of Danbury.

With our Person, Veteran and Student of the Year Awards, we honor those who are the future of our immigrant community. In the past three years, over 350 nominations of individuals who migrated to our state from multiple countries – Brazil, Peru, Mexico, Guatemala, Ecuador, Portugal, China, Haiti, Bangladesh and India – have been submitted.

Nominations that lead to winners with inspiring stories like the 2014 American Dream Person of the Year – Silvia Osdranus, who wrote in her nomination:

“My life had been a tough journey and I had to overcome many obstacles. I have been discriminated against because I did not speak English. I had defeated tobacco addiction, alcohol addiction, depression and the illness of my youngest son, the agony and pain of not having my other children with me… Today I am stronger than ever with only one vision in mind, the wellbeing and happiness of my family. I have accomplished many of my dreams; for example, I have become an U.S. citizen.”

Or 2015 American Dream Student of the Year – Mohammed Alam:

“As a child, I was compared to other children of family friends and chided with comments like, ‘Saquib got straight As and a presidential award. He listens to his parents and makes them proud. Why can’t you be like him?’ My parents wanted a clone of the stereotypical Muslim kid: straight As and a Ph.D. But it wasn’t what I wanted. I wasn’t living in Bangladesh anymore. It was America, and I had the freedom to live my own life.”

And 2016 American Dream Student of the Year – Angelica Crespo:

“I was born in Danbury, CT. I have lived here my entire life. When my father was deported, I became a 12-year-old taking on the responsibilities of an adult. I went from playing with my siblings to taking care of them. All the while, our mother was working extremely hard to make a fraction of my father’s salary to support our family. The worst feeling, besides having to let go of my father, was seeing my mother come home exhausted with swollen feet, sore muscles and drained of energy. My only goal in life is to make my parents proud, especially my mother. I want to show her that her back pain and swollen feet were not in vain.”

We find ourselves in very challenging times for people to see people as people. The American Dream Awards is an opportunity to remind us of our humanity and play a part in in helping some achieve their dreams.

So if you know someone who has inspired you with an American Dream story, or if you are an immigrant yourself who has overcome challenges to achieve your dreams and hope to inspire others in your community, nominate yourself or nominate someone for an American Dream Award.

Simply visit our website at and follow the nomination form guidelines and instructions. Tell their story, tell your story and help us celebrate, support and inspire our community.

To donate and support the scholarship program: