Home » News » “Out of the Shadows and Into the Streets!” 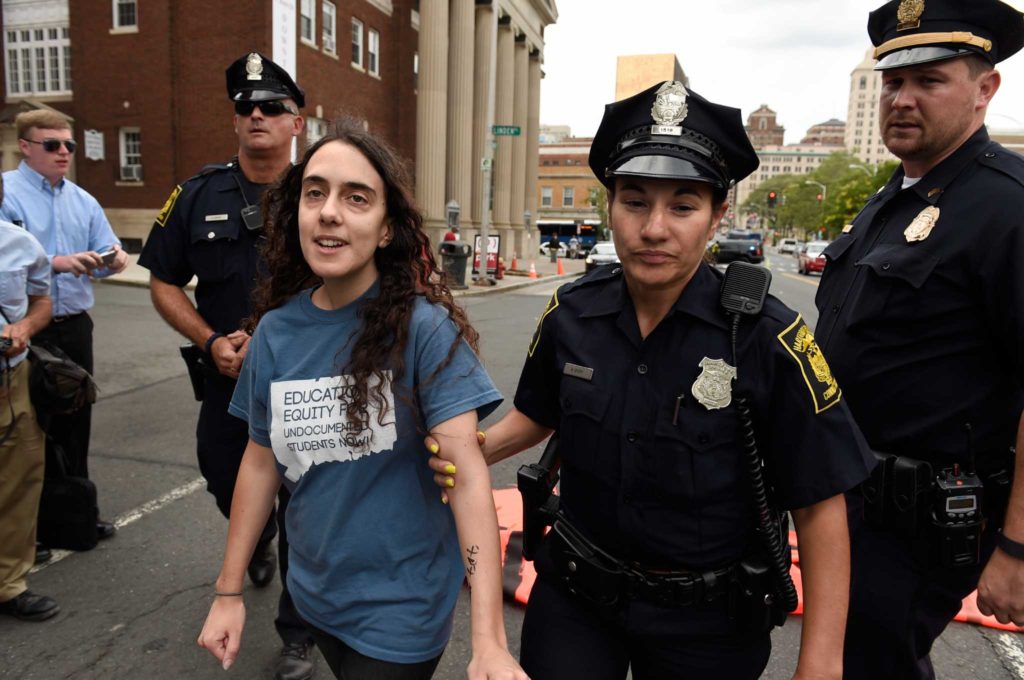 “Out of the Shadows and Into the Streets!”

I have always admired the brave leaders and youth who took such drastic measures to fight for what they believed in but I never thought I would be one of them. This past week, that changed. On Monday, June 27, I, along with eight other leaders, blocked traffic on Main Street in front of the ICE Court Building in Hartford, CT. We were arrested for standing up against deportations and for the rights of our undocumented and immigrant community.

What motivated us to take this drastic action was the decision (or lack thereof) from the Supreme Court on Thursday, June 23, which after over one year of deliberation, came out with its decision on the DACA+/DAPA (Deferred Action for Childhood Arrivals/Deferred Action for Parents of Americans) programs. Unfortunately, the decision was not a positive one for our communities. It was a tie vote of 4-4, leaving the programs in a limbo where they have neither been found unconstitutional nor approved and effectively ending their chances of ever becoming real.

That same evening of the decision, immigrant rights leaders from across Connecticut came together at a CT Immigrant Rights Alliance meeting. We decided that we had had enough; we were frustrated with the inaction of our government, angry that our communities were once again let down, and we wanted to make our voices heard. Together, we decided that we would take action and escalate in protest.

On Monday, over 100 supporters from all over the state gathered in front of the ICE Building in Hartford, and people who would have benefited from DACA+/DAPA shared their stories. Then, about 30 of us took to the street with a 40-foot banner that read “No DAPA?! No Deportations!” We blocked traffic for 40 minutes, chanting, while the police stood by and watched. Around 4:30pm, the police gave us a warning that if we did not move, we would be arrested. Nine of us had decided to stay no matter what, and we did. One by one, we were approached by the police officers and taken into the van.

I seriously questioned my decision as I saw my arrest getting closer and closer. Having been undocumented for most of my life, being arrested is something to avoid at all costs, as it can mean deportation and your whole life unravelling. But when I saw my fellow CT Students for a Dream leaders supporting me and shouting my name, all the fears went away and I was reminded why I had chosen to do this.

I decided to risk arrest because I am angry and tired of the injustice that our communities face. I risked what I did because I wanted to fight for my friends and my community who would have qualified for DACA+ and DAPA, who now have been forced to live with the uncertainty and the fear of deportation due to the deadlock of the Supreme Court. One thing that the Supreme Court decision on DACA+/DAPA has shown me is that we cannot just sit by and wait for action; we need to take action ourselves. I am tired of always waiting for change. They will never give us our community the justice we deserve. We must demand it.

The fight isn’t over yet. It’s essential that we all come together, keep fighting and keep demanding what we deserve; we cannot settle for the status quo. As we go forward into the election season, it’s essential that those of us who can vote exercise our right to do, and hold our leaders accountable.

Asian Inspired Vegetable Noodles
Check It Out Before You Work Out!