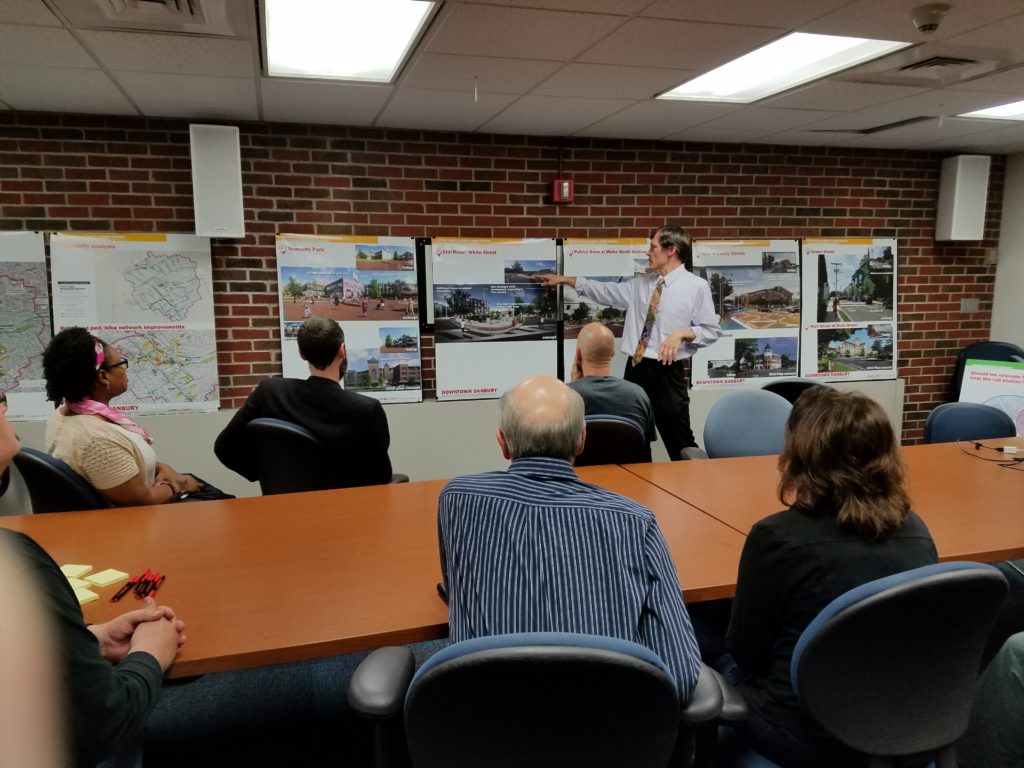 The Danbury City Council is planning an architectural overhaul of several of Downtown Danbury’s most notable spots, and it wants city residents’ thoughts on the improvements to come.

On October 19, in the third-floor meeting room of City Hall, the second in a series of meetings on the upcoming development of Downtown Danbury was held. Mayor Mark Boughton briefly took the stage before the presentation proper.

“We appreciate your participating in this process,” Boughton said, addressing the approximately thirty Danbury residents who had gathered for the presentation. “This is a really good way for us to self-inventory. I have an open-door policy, as many of you know, and I frequently have people saying, ‘You know what we need on Main Street? A bookstore or a grocery store.’”

Pointing out the various City Council members in the room, he then said, “Their job is to listen tonight, take that feedback and incorporate it into our next steps towards using the grant we have received for development.”

Mayor Boughton then handed the presentation over to architecture company Goody Clancy’s Director of Urban Design, Ben Carlson. “We already hear that a lot of folks love downtown,” Carlson said, showing a slide of the “Downtown Chow-Down” event as an example. “Downtown is a place where people want to come and live, and the more people living here, the more jobs we create, the more retail we create and the more vibrant parks we create.”

Carlson showed the audience a brief slideshow featuring photos of various Danbury spots, such as Kennedy Park, Main Street, White Street and the Metro North Station, and mock-ups of possible renovations for each one.

“The problem with Main Street is that it looks like this,” Carlson said, showing a photo of Main Street with very few people in view. He then switched to the mock-up of Main Street. “We want a Main Street like this that has people during the day, evenings and weekends, and enjoying being there no matter what they’re there for.”

Sarah Woodworth, a consultant from Goody Clancy, broke down some of the financial information for this project, including the costs, tax effects and possible profits. “I’m really excited about Danbury’s potential for redevelopment; it’s a great downtown with great bones and there are properties that would be ripe for redevelopment. The city is open to seeing investment and putting this plan together with an eye on attracting new folks to the downtown,” said Woodworth.

For the remainder of the night, attendees broke into three separate discussion sub-forums, and were encouraged to participate and give their opinions on what they had seen and heard. The sub-forums were as follows:

“This process is designed to get us to go from what we see as our vision to the nuts and bolts of ‘how do we get there,’” Mayor Boughton said. “We have the Main Street plan that we are in the process of executing, but we need a little more information about how to get from point A to point B. This moment in our history is probably the most opportune time for a success [in downtown].”

The feedback received from this event will be incorporated into the development plans and presented again in a future meeting at an unspecified date.

Daniel Trock is a graduate student pursuing a Master’s degree in Creative and Professional Writing at Western CT State University. He can be contacted via email at trockdaniel@gmail.com.

Halloween or Hallelujah?
An Insight into the Current, and Changing, Immigration Landscape