Have you ever watched a youth sport and you find yourself amazed at what has just transpired? It wasn’t the score or the win or the loss. It wasn’t the reactions of the coaches or spectators but what really grabbed your attention was the diverse participation of an unexpected athlete, a female. Yes, we absolutely see their magnificent athleticism in basketball, soccer, track and field, softball, dance, cheerleading and the list can go on and on. Yet, our eyebrows tend to rise and we get a perky smile when we witness the phenomenal talent exhibited when they are playing football or when they are wrestling. Of course, my love and respect for these two sports bring me to write with passion and admiration. As a community youth advocate, I would like to see growth in girls playing flag, tackle and wrestling. Where does it start? Where can parents inquire and where can they register? Danbury Athletic Youth Organization and Empire Wrestling Academy are two organizations that offer a vision beyond the sports’ expectations for female youth athletes.

They are not by any means similar nor do they have the same philosophy. Both organizations thrive on quality and pride themselves in offering the best in youth sports. John Degl, owner and coach of Empire Wrestling Academy, believes in closing the gap between one’s potential and one’s performance. It is the best and most noble goal anyone can have: “These girls represent the future of the greatest and oldest sport of humankind. Wrestling is the single best education anyone can have outside of the classroom or trade. The skills learned regarding self-control and self-efficacy are the most vital lessons anyone can learn.” Creating an opportunity for girls to not only learn and participate in but also dominate in this sport is but a mere feeling of empowerment. Empire Wrestling Academy maintains the status of intense training. John believes in his wrestlers so much that he holds an annual College Prep Seminar and Combine for athletes and parents. Since 2004, women’s wrestling has been recognized as an Olympic sport. It’s his opportunities that will open a path. Let’s get more of our girls to wrestle!! Work not to be as tough as the boys, but tougher. 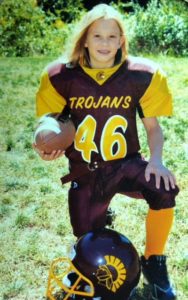 Intense practices with equipment are the norm in football practices, and it’s nothing a female athlete can’t handle. Ms. Christina Syryla is familiar with the mandatory work ethic of being a football player on the Danbury Trojans Football Team. The Danbury Trojans are now age-based, providing more opportunities for tackle participation at the youth level. This is an organization that has a well-established Executive Board, Board of Directors, Commissioners and Trained and Qualified Coaches. The Danbury Athletic Youth Organization (DAYO) prides itself in offering various sports to female athletes. We have young girls playing everything, from T-Ball to Lacrosse, Track, Speed and Agility, and Football.

From a parent’s perspective of female and male athletes, Mrs. Andrea Syryla has supported her daughter, Christina Syryla’s, decision to play multiple sports, including soccer and tackle football with the Danbury Trojans. “Playing the sport taught her that she could do anything she put her mind to,” said Andrea. We have seen an increase in girls playing flag football in DAYO. Marquita Saunders is one of our exceptional female coaches. She makes sure to let her female athletes know that they can accomplish what the boys can and more. Mrs. Saunders says that during draft day she makes sure she has the most girls on her team and they always make the playoffs! The girls enjoy having her as a coach.

“The girls feel very comfortable with me in tackle and flag. It looks like just in the last couple of years I have seen more girls out there,” she explained. How wonderful to see a female coach role model! Marquita plays tackle football in a women’s football team, with the CT Hawks. Give your daughter an opportunity to participate, to belong and to succeed. Don’t limit what they can do and what they can achieve. Coaches like John Degl and organizations like DAYO thrive on coaching and opening doors that others won’t.

For additional information, please call Estela Camacho at 203-530-2457 or email her at EstelaGC005@gmail.com. You can also learn more about the organization at www.dayosports.com, on Facebook (Danbury Athletic Youth Organization) or Twitter (@DAYOinfosports), or read about us in Tribuna Newspaper.