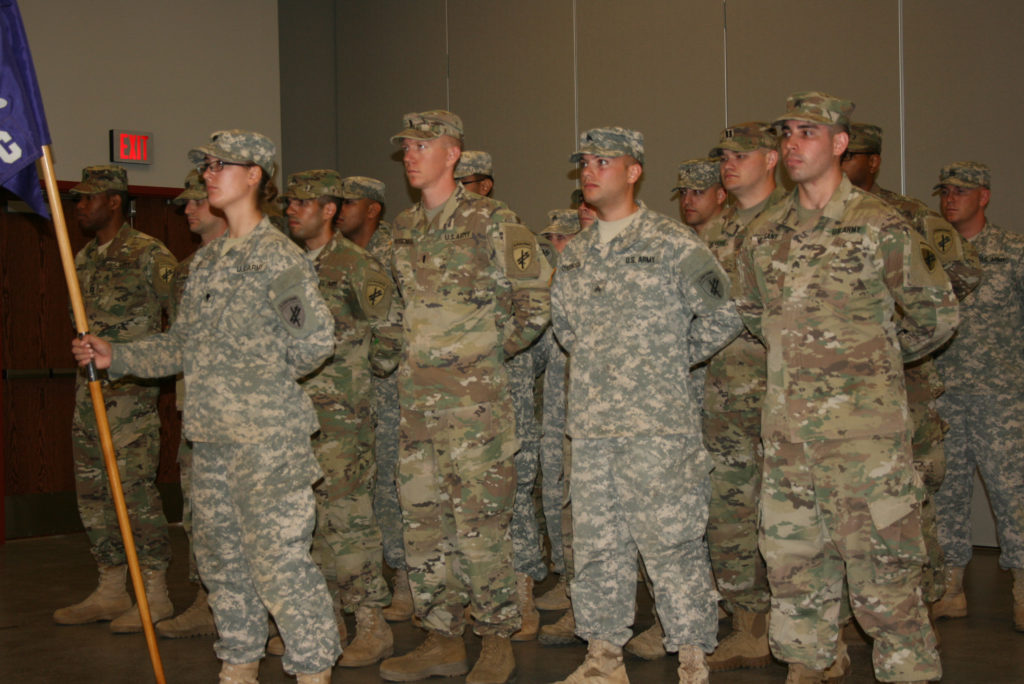 More than a deployment ceremony, family members, friends, military staff, community leaders and dignitaries gathered at the Veterans Armed Forces Reserve Center in Danbury to celebrate, recognize and honor the courage and dedication of the Charlie Company of the 411th Civil Affairs Battalion (CA BN) 34 soldiers as they prepared to leave for over a yearlong deployment.

The protocol was followed by the Color Guard, marching under the command of Lieutenant Colonel Reginald Kornegay to Present the Colors as the National Anthem was played.

The time came to honor the soldiers that have worked above and beyond to serve their country with the presentation of medals and coins by LTC Kornegay.

“I didn’t think I was going back to Africa three years later, but I’m looking forward to [it],” said 41-year old Staff Sergeant Gonzalez, who was previously deployed to Africa in 2012-2013.

When asked what and whom she was leaving behind for over a year, she recalled missing her 20-year old daughter’s high school graduation on her first deployment. Now, she will proudly serve her country but won’t be around to witness the birth of her first grandchild.

SSG. Wasilewski, 30, of Derby, CT joined the Army when he was 17 years old. This month, he is celebrating his 14th anniversary in the army. “I enjoyed what I do. I was always running on camouflage and playing with guns since I was little,” he recalled with pride.

The experience, however, never repeats itself, according to him. “Every time you are deployed is different, especially now that I am in a leadership position. I am looking forward to take another challenge. I think it is going to be a pretty smooth deployment. We had a lot of training,” he said.

The feeling of seeing a loved one sent off to an unknown destination makes saying goodbye a bittersweet moment. According to Charlie Company Commander Maj. Andres Gil, a ceremony is held each time a unit is about to deploy. “It gives the families of those who are deploying an official point of embarkation,” he said.

And that was the vibe at the Veterans Armed Forces Reserve Center, as families and fellow soldiers walked out of the room to enjoy a BBQ luncheon before their departure.

“It’s a noble thing that you are doing for us, for the citizens of the United States of America, so we can peaceably assemble and express our opinion. I am deeply humbled, deeply honored to be here, and for the service you are providing to our nation,” said Danbury Mayor Mark Boughton, encouraging the soldiers and their families.