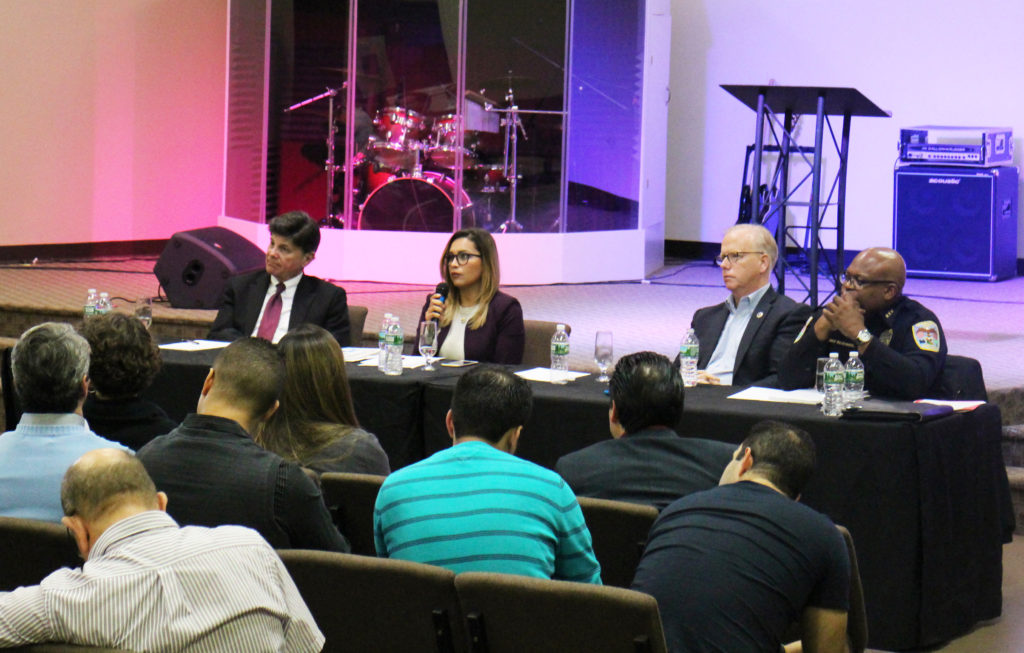 Editor’s Note: The following story is the first in a three-part series covering a two-hour community dialogue with Mayor Mark Boughton, Danbury Police Chief Patrick Ridenhour and Deputy Superintendent of Schools Dr. Bill Glass on immigration and community relations. We will begin the series with the transcript of Mayor Boughton’s answer to the question posed to the panel: “What does a possible partnership between ICE and the City of Danbury mean to our immigrant community?”

Mayor Boughton on ICE
We have always provided cooperation to ICE when they’ve asked. We do not initiate with ICE. I’ll give you a couple quick scenarios of how that happens. Then, we’ll continue to read the policy. We also have to operate under the latest law that was passed in 2013, the Trust Act. I can’t as a community leader say, “You’ve got to follow the law” and then just not follow the law and let that go. I guess the best way to describe this and for you to understand how we work, is to give you a scenario.

Typically, there’s really two ways that we get involved with ICE. One is that ICE may be doing an ongoing investigation, that investigation may not only include just ICE; it may include the FBI [Federal Bureau of Investigation], it may include the DEA [Drug Enforcement Administration], or the ATF [The Bureau of Alcohol, Tobacco, Firearms and Explosives]. They’ll ask and they’ll say, “Listen, we need your help. We don’t know Danbury very well, can you let us use one of your detectives for a couple of weeks to be a part of this taskforce, a part of this investigation.” That taskforce or investigation is usually directed on, frankly, some very horrific crimes. Could be human trafficking. Could be sexual slavery. Could be crimes against children, just horrible stuff that no one wants in their community, ever. So we’ll work with them.

The other way we may be involved with them is if they call us and say, “We’re looking for Johnny Jones. Do you know where he lives? Do you know where the street is?” and we’ll provide the assistance and support to tell them. In both cases, a) it has to be done under the limitations of the Trust Act; and b) it’s a very specific reason that we’re working with them.

The Trust Act was passed in 2013 and it’s signed by the governor. [It] specifies when you can work with ICE and how you can work with them. Most of those instances revolve around crimes or the potential for some harm being done to the community. They also revolve around detainers, which are requests from ICE that say, “Well, we want you to hold this guy or this gal, because there is a problem.” I’m going to explain some of the differences between Danbury and other cities and then I’ll pass onto Chief Ridenhour, and just allow him to go on. It also speaks to federal bench warrants [is a legal document issued by a federal judge that allows people to conduct a search, seizure, or arrest] that were put out by a judge.

There is a lot of latitude in the Trust Act and it is subject to a lot of interpretation in different departments, interpreted differently, but we have a very good system and most importantly, we have very good detectives here in Danbury that know the law and know how to utilize that piece of legislation; that’s the law. That’s pretty much how we operate. Nothing’s changed about how we operate.

Several years ago, prior to that, we did engage in a program, called 287(g). [It’s] part of the Federal Code; it’s already there. It’s not something that President Trump invented; it has always been there. That program was very controversial. Some of you may have come out and held up signs, protesting my office.

What we found, part of the challenge with any kind of program like that is that there has to be a lot of communication, before you go out. We did the program and I think it’s fair to say that people in the undocumented community thought it would be one thing, [and it] turned out to be something completely different. We apprehended over 20 people in that program. [With] every single one of them, if I told you what they did here, you would say, “I don’t want that person living amongst us.” Crimes against children, one individual had eight DWI’s. Eight! He could’ve killed someone. We had other people that were involved in human trafficking. We had another person that was arrested four times for drug dealing, serious drug dealing, weapons violations, things that you just don’t want in the community.

That’s how we used that program. If you asked me, I would say that [although the] partnership caused a lot of fear in the beginning, after about six months of it, somebody goes, “Oh, I get it, no problem.” We got all that out of the way. President Obama sun-setted that program in 2010. Then, he replaced it with Secure Communities, which was different. We didn’t go and re-up the training the detectives had, so on and so forth. So, I guess what I’m trying to tell you is that since it was sun-setted, our policy has always been to follow the Trust Act and to cooperate when asked. We generally will not initiate any kind of investigation, unless, again, it involves some horrible crimes in nature.

The problem that we have here is that when the governor sends out the directive or guidelines in saying, “Any police department, we don’t recommend you work with ICE,” philosophically, I have a problem with that from a law enforcement side. I understand your concern, again, but in order to stay safe here and to be proactive, we need to use every tool that we have to protect all of our residents. We will continue to do that. The only thing that we do that’s a little different than New Haven, and some of the lawyers you certainly know more about it than I do, is we will honor a bench warrant, a federal bench warrant from a judge. The judge says, “If we run your name through the collect system and we get a hit”; by hit I mean, “We’ve got a problem here.” He says, “Please hold this person for a warrant put out by immigration court.” We will hold them.

Sometimes, he says, “Let them go, too busy.” [That] doesn’t get our priorities, in terms of what we’re looking for. Other times, he’ll say, “We’ll be down in a day or two to pick the person up.” That’s a little bit different than what some other communities do, but again, it’s very rare when that happens, [and] truth is, it’s very safe. Maybe a handful of times a year and then beyond that, if there’s an investigation going on, we want to be part of it, we want to know why federal agents are in our city, we want to know what they are doing, if there is a concern. I’d rather be part of that investigation than sitting on the outside, having many of you calling and saying, “What’s going on? I saw all these police cars, something is happening.” And we [the city] don’t really have any involvement. If we know about it, we can say, “We’re involved in an investigation, I can’t discuss what it is, but we got work to do and you don’t really have to disrupt your day.”

Beyond that, when we are send out directives by the governor, if I’m put in a position that a newspaper calls me, and asks, “Are you going to work with ICE?” [I’ll respond] “We’re going to continue the same policy we’ve always had. The answer’s yes.” That’s not an endorsement of any national policy. It’s an endorsement of what we’ve done here, that has worked to keep our city safe.

In our next issue, we will feature the transcript of portions of the lengthy question and answer period and focus on Chief Ridenhour’s remarks. The third will cover the remarks of Dr. Bill Glass on how the issue of ICE has impacted students and families in the district, with helpful tips for parents and guardians to safeguard their children.
To learn more about the TRUST Act, visit this link: https://www.cga.ct.gov/…/pdf/2013PA-00155-R00HB-06659-PA.pdf
To watch the full video of the meeting, visit Tribuna’s Facebook page or this link on our website (http://tribunainenglish.com/news/community-meeting-on-ice-and-the-city-of-danbury/ ).