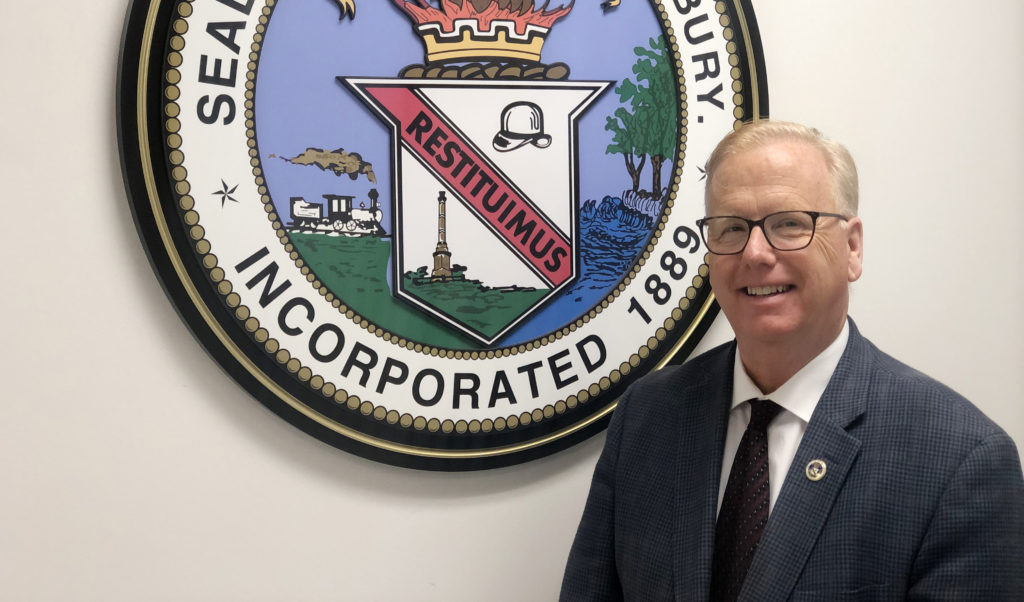 Last month, Mark Boughton won his 10th term as mayor of the City of Danbury. He earned the title of the longest-serving mayor in the city’s history after defeating Democrat Chris Setaro, a local attorney and former City Council president, in a competitive race.

As promised in our last issue, Tribuna conducted an in-depth interview with Mayor Mark Boughton on the race and his plans for the City of Danbury.­

Tribuna: How would you describe your last race?

Mayor Boughton: “I consider it a solid victory in many ways because I think people sort of counted us out. I knew I had to work hard, and the whole team worked hard, but I also felt confident that we could get it done, and we did. So, I am very thankful to the voters for that.”

“When you run a competitive race, it’s good for you. I think if I had not run for governor twice before, I probably wouldn’t have been as sharp as I was in this race. My experience on the campaign trail and my debating skills were sharpened; it prepared me for this race and we did a solid job all the way through.”

Tribuna: What have these 18 years as Mayor meant to you as a person?

Mayor Boughton: “You know, it’s a – it’s a great honor to be in this position. I don’t think I have a plan about how long I’ll serve. I mean, I think at this point in my life, I put the city first in so many ways, I just never had a clear plan like I probably should’ve, but I never did.”

“Everybody has choices to make. And my choice was to live a life of public service. Because that’s what makes me happy. When other people are happy, I’m happy. The tough part is when other people are upset, I’m upset, too, so, you know, it goes both ways. I made that choice, and maybe I’m not rich in terms of money – but I’m rich in terms of relationships and people that I’ve come to know and love and admire. So, to me, what it means is fulfillment, and it’s about feeling needed, it’s about feeling wanted, and respected, and it’s about helping others. There’s nothing better than a smile on somebody’s face when you sometimes solve a small problem, other times a very big problem. That’s what makes this job so cool and why it brings me so much satisfaction.”

Tribuna: What would you describe as the secret to your success as Mayor?

Mayor Boughton: “The one thing I consciously do every day is to think out of the box –I think that’s one of the secrets of my longevity. I’ve never looked at a problem and said, well, it just is the way it is because that’s the way it is. I look at a problem and think, how would you approach this in business? Or how would the public sector approach this, how would somebody in academics approach this, and then try to figure a way through – that makes me a better leader. I would say from 2001 to 2019 – but mainly in the last six years – I kept saying to myself: shake up your staff, don’t get into a rut, try something different and go out of your comfort zone.”

“That has made me not only a better person but a better leader. That is something I want to continue to work on, because in this job you should never regret having to come to work, and I haven’t done that yet.”

Tribuna: What are your top three priorities in your next term?

Mayor Boughton: “One is we’re going to complete our plan for our schools in terms of space and programming. There are two pieces to that. I’m going to begin the process of getting permission from the voters to go ahead and execute that plan.”

“Two, we’re going to continue to work and improve our infrastructure, the streets, roads, bridges, paving, drainage, nuts and bolts of the community. Three, we’re going to take a different path as it relates to Main Street. The details are still being worked out, but we are going to be pushing business owners and other stakeholders in the issue to think differently.”

Tribuna: What are the top three challenges you think the city is going to face in these next two years?

Mayor Boughton: “Budgeting is going to continue to be a challenge, but that’s nothing that we haven’t had over the last 18 years. There’s never enough money to do everything you want to do. Working and developing a relationship with the state that is fruitful to Danbury will also continue to be important. It’s time that we started working as a team and delivering the resources that we need, versus coming to me and complaining that we’re not doing enough. If you’re a state representative, if you’re a state senator, then you ought to be doing something else, to be part of the solution, not part of the problem. We must try to get our fair share out of the State of Connecticut.”

“I want to keep our economy growing because it is key to our low crime rate, and continue to support our businesses, you know, whether you’re a small business or a medium business, we want you to feel comfortable in setting up shop here in Danbury, so we can’t lose that.”

“But the biggest challenge for us in the next two years is that we are going to have some construction on Main Street. We’re doing sidewalks, and we’re going to have a big disruption in our infrastructure as we pave, and as we work on getting a train link into Southeast New York to connect our residents to Manhattan. Our residents and businesses must be patient and understand that we’re playing long ball; we’re not playing short ball – this is about the future of Danbury.”

Tribuna: Do you have a special holiday message to the community?

Mayor Boughton: “The beauty of Danbury is how well everybody gets along, whether you’re from Ecuador or Brazil, Estonia or Latvia. My wish for the holiday season is for us to keep that feeling of kindness towards each other as we go forward. Some of the challenges I mentioned earlier are going to require cooperation, and it doesn’t matter where you come from. It just matters what you want for the future. We have worked together. We don’t always have to be on the same page, but we must work together. I know the immigrant community in Danbury will continue to contribute towards that future, and I encourage anybody to reach out to city hall to my office, or through their pastors – whatever they need to do to. Don’t feel uncomfortable about talking to me or working with me. My team and I can’t solve all the problems, but we can try.”