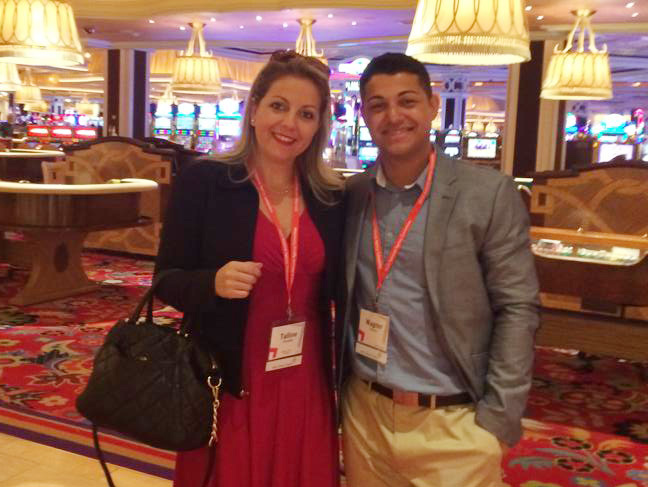 The Story of Talline Carvalho

For Talline, the United States represents her home and a place where she can be anything she wants to be as long as she is willing to pursue it.

Talline Carvalho, a Brazilian business owner in the insurance industry, is Tribuna’s interviewee for the American Dream profile in this issue. Born in Criciuma, Santa Catarina, she has been living in the United States since 2003, when she decided to come alone at age 21 looking for a better life. The plan was to come, save some money and return to Brazil. Today, as an U.S. citizen, Carvalho talks about life in the country that embraced her and shares her thoughts on the current fear and distress afflicting the undocumented immigrant population.

“I worked as a manager at a jewelry store in Brazil and attended business administration classes at a college. The economy of the country was not appealing and I could not foresee a promising future at that time. Then, I decided to try my luck here in the United States.”

After leaving Brazil, she faced her first challenge upon her arrival here. “A friend was supposed to pick me up at the airport, but she simply didn’t come. And I didn’t know anybody else here. I soon remembered an acquaintance that had a brother residing here, and I called her asking desperately for help. Her brother picked me up at the airport and I lived in his house in Hartford for about 20 days. Later on, I moved to Naugatuck, where I am still living until today,” she recalls, laughing.

Away from her family and not knowing anyone, Carvalho’s first year in the United States was not an easy one. “What hurt me the most was that I missed my family. Having to make decisions on my own, with no friends, and not being able to speak the language were extremely difficult situations. When I first came to this country all I thought to do was to work, save money and return to Brazil. That was my plan,” she emphasized.

After four months, Carvalho decided to study English. She could hardly communicate and she believed that by investing in learning the language doors would be open in the near future.

“I took classes in English as a Second Language (ESL) at a school in Waterbury. I studied for one year there and at that time, I quit two jobs, and kept one. I was not earning much, but I needed to focus on learning English. In my mind, that was the decision I had to make. Today, I am thankful to God for choosing that path.”

Right after learning English, Carvalho started to attend Naugatuck Valley Community College. “When I realized that I would be able to go to college here, I fought tooth and nail for that chance. I chose to go back and restart my business administration major.”

In 2005, two years after her arrival, Carvalho received a green card. “After being granted my legal status in the country, I took a job at an insurance agency in Naugatuck, where I worked for 9 years. During that time, I obtained several licenses in that industry – auto insurance, homeowner’s and property insurance, and life insurance, among other services. In 2014, I sought an opportunity to open my own insurance business. The grand opening was on January 1, 2015 in Danbury.”

Mayor of Waterbury for the Day

In celebration of the Independence Day of Brazil, Carvalho was nominated as Mayor of Waterbury for the Day in 2013. She was nominated by members of the Brazilian community to represent the country. “It was an extraordinary experience and a victory for the entire community. All of us Brazilians were being paid tribute at that solemn moment. It was deeply touching to see Brazil being recognized. I am very proud of my country of origin,” she said.

Solidarity with others’ pain

“I know a lot of people in the entire immigrant community. It breaks my heart to see what is currently happening in the country. I see many people in anguish and despair. We should have immigration reform because there are a lot of good people, hard workers, who pay their taxes and just want to live here in peace.”

Carvalho mentions an important point: the need to check information before sharing it to prevent causing panic in the community.

“We must be careful with the information we receive to avoid spreading panic. I see people sharing lies just to destabilize the community. Of course, there are people who share it naively, but there are some who do it to cause fear.”

“Look for sources that are safe, informational and real. Don’t panic over everything you hear out there because from now on the trend is to get lots of nonsense ‘news.’ Visit the White House site, the ICE websites or other media that are committed to spreading factual information. We need our community to unite at that moment because unity is strength and we are only stronger together.”

Carvalho makes an appeal to all immigrants: “Never give up your dreams. Struggles are within the framework of a larger lesson. Know that you will be rewarded ahead.”

Why Are They Still Calling?
To Bring More Peace in the World: A Public Talk with Noble Prize Winner Leymah Gbowee