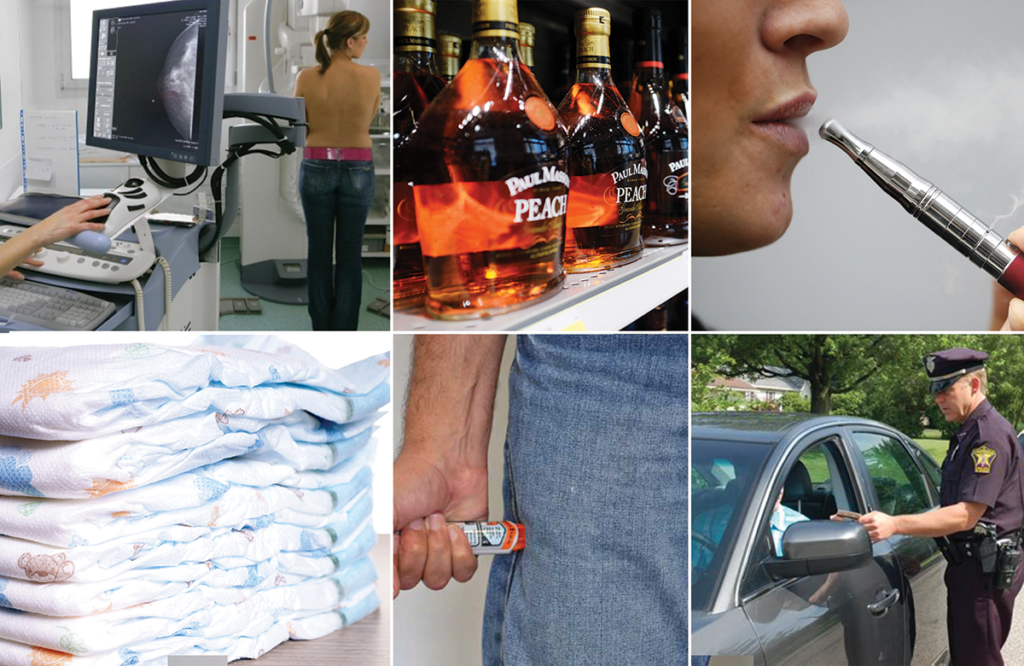 New laws were set to go into effect on January 1, 2019 that will change the lives of some Connecticut residents, from a mandate that opioid prescriptions be sent electronically to curtail fraud and that doctors discuss the dangers of addiction when prescribing medicine, to the acceptance of electronic proof of your auto insurance card to show police.

Here are highlights of the top 35 new laws that went into effect January 1:

The act generally makes it illegal to sell, transfer or purchase a “rate of fire enhancement” firearm device typically known as a bump stock. Bump stocks were used in the Las Vegas shooting, in which a single shooter was able to kill 58 and injure more than 850 people.

Motorists can now present auto insurance proof electronically on a cell phone or other device to law enforcement. The information is generally accessible via an insurer’s app.

Prescription drug monitoring program data can be shared with state agencies for drug abuse studies. Generally, the law requires controlled substance prescriptions to be sent electronically and requires practitioners to discuss risks associated with opioid drug abuse when prescribing to any patient.

An electronic rape kit tracking system will be established. It will also pave the way for policies to ensure sexual assault victims learn whether DNA evidence was entered into a national DNA bank and to know if it matches anyone in the data bank.

E-cigarettes and similar devices must be purchased through employee-assisted sales instead of self-service displays.

Certain health insurance policies will have to cover 10 essential health benefits that are listed in the Affordable Care Act.

Pregnancy as a Qualifying Event for Special Enrollment

Certain health insurance plans will be mandated to allow special enrollment for pregnant women. The law applies to individual health plans subject to the ACA HMOs, and hospital and medical service corporation contracts offered to individuals.

There is an expansion of breast imaging services that certain health insurance plans must cover.

The Department of Public Health will be required to review maternal deaths in the state and gather data. The data will be used by a review committee to reduce maternal deaths.

The U.S. has the worst rate of maternal deaths in the developed world.

A telehealth provider can now prescribe schedule II and III controlled substances other than opioid drugs.

Certain items, including tampons, sanitary pads and diapers, will no longer be subject to the sales tax.

A $12 insurance surcharge per year, or $1 per month, will be applied over the next 11 years to certain homeowner insurance policies. Most of the surcharge will be deposited into the Crumbling Foundations Assistance Fund.

Remember when an Equifax data breach leaked the sensitive information of 143 million Americans? A government report found glaring security errors, but not much changed. The new law prohibits credit rating agencies from charging a fee to place, remove or lift a temporary credit freeze. It also prohibits making consumers enter into agreements to limit the liability of credit rating agency in order to lift a credit freeze.

A federal law provides for free credit freezes and thaws.

Certain businesses must provide identity theft mitigation services to customers for 24 months, instead of 12 months, in the event of a data breach.

Are you tired of picking up a call from a seemingly local number only to find out you “won” a free cruise or owe the “IRS” money? That will likely continue, but it’s now a state crime if a person is caught. It is now a Class A misdemeanor for a person to use a blocking service or other service to circumvent caller ID to transmit robo calls.

This law requires counseling and certification requirements for reverse mortgages, which allow homeowners to turn equity in their property into liquid assets.

The Liquor Control Commission becomes the final authority to make decisions that are adverse to a permit holder. This new law also prohibits anyone from using automated ticket purchasing software to purchase tickets on the Internet.

Sale of Entertainment Tickets on the Secondary Market

The new law generally prohibits the sale of nontransferable tickets. It applies to tickets for sporting events, concerts and theatrical performances but not movies, concert venues with less than a 3,000-person capacity and tickets sold to students at a public higher education institution.

Regulation of Uber and Lyft

A new law will require transportation network companies like Uber and Lyft to register with the Department of Transportation, perform background checks on drivers and establish insurance requirements for drivers.

The act also allows taxi companies to use apps to calculate rates.

A comprehensive set of laws that establishes requirements for the state to use renewable energy resources.

Public agencies can petition the Freedom of Information Commission for relief from vexatious requesters for a period of up to one year. Vexatious requesters are people who make an inordinate number of requests or requests that are very large in scope or interfere with an agency’s ability to operate.

In domestic violence incidents in which there are two or more opposing parties, police will be trained to arrest the offender they believe to be the dominant aggressor. The law doesn’t prohibit dual arrests and doesn’t apply to college students in on-campus housing and tenants who live together in residential rental properties who aren’t in a dating relationship.

The court, when sentencing an individual for a criminal offense, must inquire whether there are requests from victims for restitution.

The law provides immunity from civil or criminal liability for anyone who acts in good faith to medically assist a child who is being abused or neglected. Some examples are taking a photograph or x-ray, causing the child to be taken into emergency protective custody and disclosing a medical record.

A new law prohibits those under the age of 18 from being placed in administrative segregation status in the state’s prison system. The law doesn’t apply for certain special circumstances, such as a high security inmate convicted of a capital felony or murder with special circumstances.

In general, pregnant prisoner restraint will be limited. The law also establishes the right to receive specialized counseling and written material regarding pre- and post-natal care. The law was created after a baby was born in a prison cell.

The study of the Holocaust and genocide will now be included as part of the social studies curriculum in public schools.

This law creates the Connecticut Retirement Security Authority, which will provide a Roth IRA plan for many in Connecticut.

Qualified private sector employers with at least five employees that don’t already offer a retirement program must enroll them in the state’s program. Employees can opt out if they choose; otherwise, they will have between three and six percent of earnings deducted to the IRA.