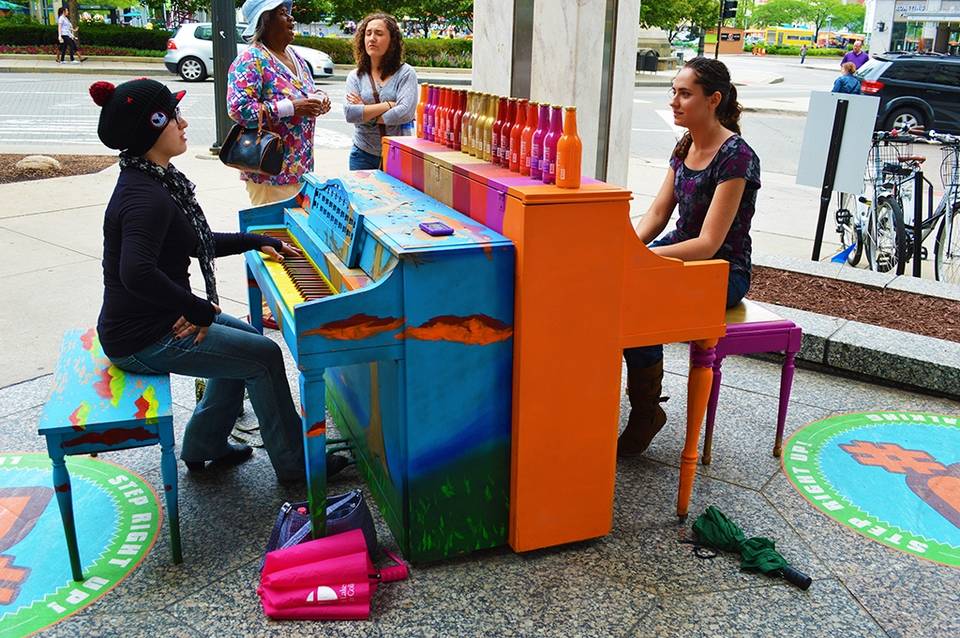 What happens when you put a sole piano — sans pianist — in a public space? International artist Luke Jerram was commissioned to find that out in Birmingham, UK, in 2008. He took the ivories to the streets for three weeks, and the result was “placemaking,” before the term was trendy.

In those three weeks, more than 140,000 folks played, listened or danced. To date, the project — “Play Me, I’m Yours” — has installed more than 1,500 street pianos in public spaces in more than 50 cities worldwide, and has attracted over eight million folks. Next up, street pianos will appear in Boston in September.

Everyone needs “a third place” — not home or the workplace but one that transcends the everyday. Think of the cantina, the taverna, the cafe or the great Danbury social clubs at their height when Hat City made hats.

Jerram writes, “The idea for ‘Play Me, I’m Yours’ came from visiting my local launderette. I saw the same people there each weekend and yet no one talked to one another. I suddenly realized that within a city, there must be hundreds of these invisible communities, regularly spending time with one another in silence. Placing a piano into the space was my solution to this problem, acting as a catalyst for conversation and changing the dynamics of a space.”

And that is what I want CityCenter Danbury to accomplish as we engage, activate and provide ownership to those who live, work, visit, learn — and play — downtown.

The general conversation was how to take public spaces, usually located in the urban core, and transform them into desirable public spaces that a diverse range of residents could enjoy. I returned to CityCenter with the following takeaways.

One of the components that I thought was most impactful was the concept of putting together plans or events for certain spaces that wouldn’t cost thousands of dollars or require a lot of resources and time to execute. Some examples that were provided included installing chairs or tables throughout a certain area to encourage folks to utilize the space in a different way than they normally would.

Another component that I thought was very valuable was making sure the community is engaged in the discussions of the potential use of a public space, and arranging a brainstorming process to identify needs and potential.

I was intrigued by a discussion on triangulation, since this factor, I believe, is critical if one would like to see sustainable success. Triangulation is the importance of creating an environment that fosters a variety of activities that support and sustain each other.

And finally, it was to hear, “Don’t let the ‘it will cost us too much money’ response be an excuse against moving forward.” Smaller budgets require more creative thinking, which will hopefully provide for a more unique experience.

P.J. Prunty is the executive director of CityCenter Danbury, the Downtown Danbury business improvement district. If you have any questions or comments, please feel free to contact him at 203-792-1711 or at pjprunty@citycenterdanbury.com.