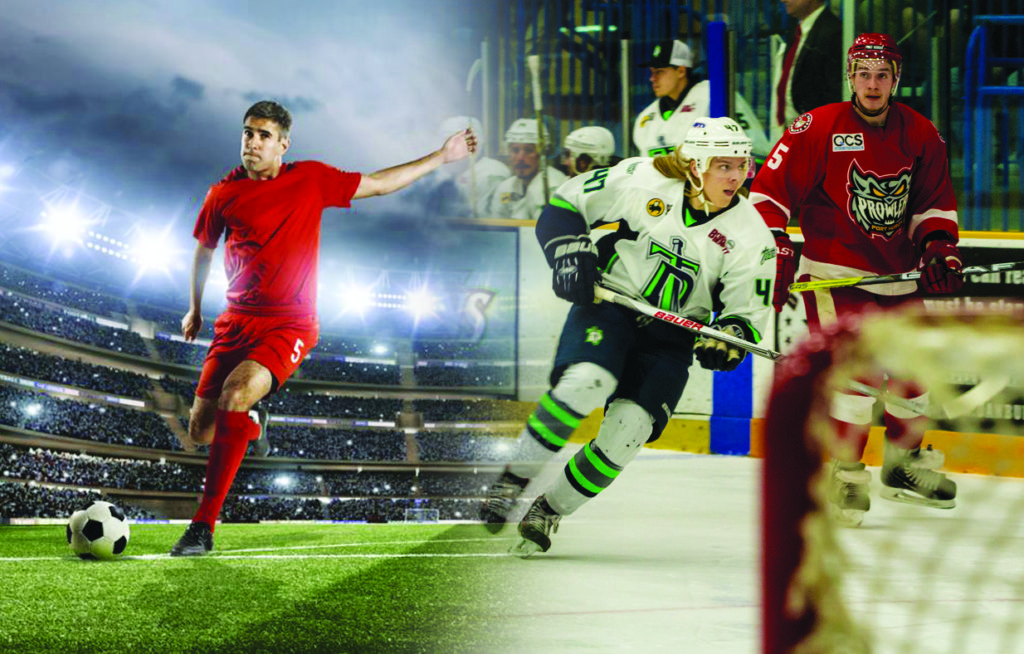 The second season for Danbury’s pro hockey team, the Danbury Titans, kicks off in just about a month. There’s a lot that is new this season – a new head coach, new players, new team sponsors. What remains the same is the excitement from both the team management and the fans. “We are definitely excited for the season,” said Bruce Bennett, owner of the Danbury Titans.

Bruce clearly loves sharing his joy for the sport. At the recent Taste of Danbury, he said a little boy came over to the Titans booth and asked, “What’s hockey”? Not sure how to explain it, they showed him a video. When the video finished, the boy told them he couldn’t wait to come to a game. And just like that, a new hockey fan was born.

Funnily enough, Bruce was introduced to hockey not very long ago, when his business signed on as a sponsor for the local pro team at that time. He started coming to games and the passion of the players paired with the fast-paced action hooked him immediately. He became an instant fan. He hopes that he can do the same for people who are just like him and unfamiliar with the sport.

If you’re a soccer fan, he remarked, you might also enjoy hockey. While it’s easy to see the differences between the two sports, hockey has a lot in common with soccer. In general, both are team-oriented sports based on continual movement over the course of the game. The objective is to get the ball/puck past the goalkeeper/goalie into the other team’s net. How hockey and soccer players do that is also similar. The responsibilities of midfield players in soccer are like those of the center man in hockey because they track up and down the field/ice, participating in both offense and defense. Wingmen in both sports are also similar, because they are meant to get the ball/puck towards the net. Like soccer players, hockey players will use shoulder-drops and fakes to throw off defending players. Keeping possession of the ball/puck until you or a teammate can score is another important part of both sports.

Bruce pointed out that the Danbury Ice Arena offers many ways to get into the sport, with lessons for children as young as 5 years old and leagues for adolescents, adults and even senior citizens. The arena also has open skate times. If you don’t own skates, you can rent them at the arena. “They have a lot going on here,” he added. Whenever the Titans play a Sunday home game, after the game, you can lace up a pair of skates for free and skate with the players.

Bruce may be the owner of the team, but he believes the team is a part of the community. It’s not just “his” team; it’s Danbury’s team. He sees the team as a great way to rally together all parts of the local community. It draws people together for a fun, family friendly night out right here in the downtown. On game nights, you can park in the garage or in the lot across the street from the arena, grab dinner at one of the restaurants within walking distance like La Mitad Del Mundo, Los Andes, El Bacano, El Ranchero, Two Steps and more, then walk over to the arena for the game. “It’s a great night out for the whole family,” Bruce said. For local business owners, he added that becoming a team partner is a great way to reach new customers. Over a thousand fans regularly fill the arena to cheer on their team.

The first game of the season is Friday, October 28 at 7:15pm at the Danbury Ice Arena. At the game, the team will debut its newest staff member. “You won’t want to miss it,” smiled Bruce.