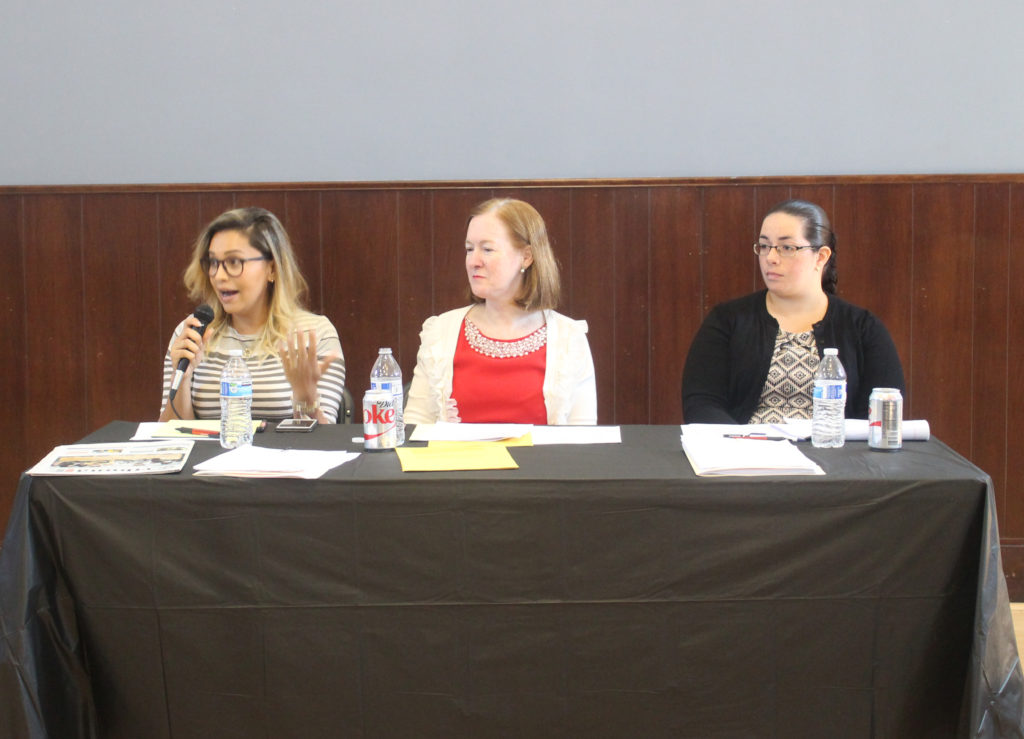 Emigrantes Brasil & Wide Focus Video Productions recorded the workshop and the video will be made available to the public through Tribuna’s Facebook Page at www.facebook.com/tribunact and website www.tribunact.com.

Below is a compilation of the most important topics discussed.

Judge Dianne Yamin said it is her impression that the focus of the enforcement will be on criminals and persons of violent backgrounds, and there should not be a sense of panic in the community; however, it is always important for parents to be prepared for future events.

“For instance, all parents should have a last will and testament, durable power of attorney, a health care power of attorney, and a living will. In the case of possible deportation, they should also have a standby guardianship, which would allow for immediate care of the child outside of court intervention,” she counseled.

According to Yamin, a standby guardian is deemed a useful safety plan for undocumented immigrants. A standby guardian of a minor is defined as follows: “A parent or guardian, as principal, may designate a standby guardian of a minor in accordance with the provisions of sections 45a624 to 45a-624g, inclusive. Such designation, in a form as provided in section 45a-624b, shall take effect upon the occurrence of a specified contingency, including, but not limited to, the mental incapacity, physical debilitation or death of the principal….”

“Some of the most crucial benefits of standby guardianship is that it provides someone who can take care of the child immediately upon a contingency, such as deportation,” said Yamin. “It’s a very easy procedure. Parents and guardians can designate a standby guardian ahead of time. The guardianship only takes effect once the contingency takes place, and the affidavit to that effect is signed. No court filing is necessary.”

Who can nominate a standby guardian?

-A parent or legal guardian may use the statute regardless of health status; however, the guardianship only lasts one year from activation or until the triggering event or contingency ends.

How to establish a standby guardian

-Designation must be witnessed and a copy provided to the standby guardian.

How the standby’s authority becomes activated

-Upon the triggering event, the standby must submit a written declaration of facts (affidavit) that the specified event has occurred. NO court filing is necessary. The standby guardianship is effective for one year.

-If the parent dies, the standby guardian remains in place for 90 days; then, he or she can petition for permanent guardianship through the courts.

-As specified in the designation, including, but not limited to, death, mental incapacity or physical debilitation.

Involvement of the non-custodial parent

-If both parents are alive, both must consent, unless either has been removed as guardian or parental rights have been terminated.

Relationship between the parent’s and the standby’s authority

-Revoke any time in writing to the standby.

This year, Gov. Dannel P. Malloy announced the creation of a “tool kit” for concerned families. The Governor said there are an estimated 22,000 children living in Connecticut who are citizens but whose parent or parents are undocumented.

For more information on standby guardianship, or to download the sample form, visit http://www.ctprobate.gov/Pages/ChildrensMatters.aspx.

Attorney Lisa Rivas explained that there are a few areas the community must pay close attention to, including how two of the executive orders signed by President Trump will be implemented by the Department of Homeland Security. She highlighted the following:

The order says the priority will be removing deportable immigrants who “have been convicted of any criminal offense; have been charged with any criminal offense, where such charge has not been resolved; have committed acts that constitute a chargeable criminal offense; have engaged in fraud or willful misrepresentation in connection with any official matter or application before a governmental agency; have abused any program related to receipt of public benefits; are subject to a final order of removal, but who have not complied with their legal obligation to depart the United States; or in the judgment of an immigration officer, otherwise pose a risk to public safety or national security.”

Based on the wording of the executive order, a criminal could include someone who’s charged with but not actually convicted of a crime.

The last provisions apparently include anyone who an immigration official feels endangers “public safety or national security,” even if that person doesn’t face charges, giving broad authority to officers.

And the term “criminal offense” isn’t defined in the order and could include a wide range of charges, including, presumably, misdemeanors.

How to Be Prepared

In the safety planning portion of her talk, Attorney Rivas made recommendations for undocumented immigrants:

Documents to carry on you always:

Documents to have organized at your home

Only if you are concerned about being detained then you may want to consider one of these options:

“It was a pleasure being invited and able to speak to community leaders about the changes in immigration law and policy. I also urge community members to watch the video and read the materials so that they can be prepared and understand what is going on,” said Rivas.

If you would like to attend the next community dialogues or workshops, please submit your email address, full name, address, and phone number to danburycommunitydialogues@gmail.com to be added to the mailing list.