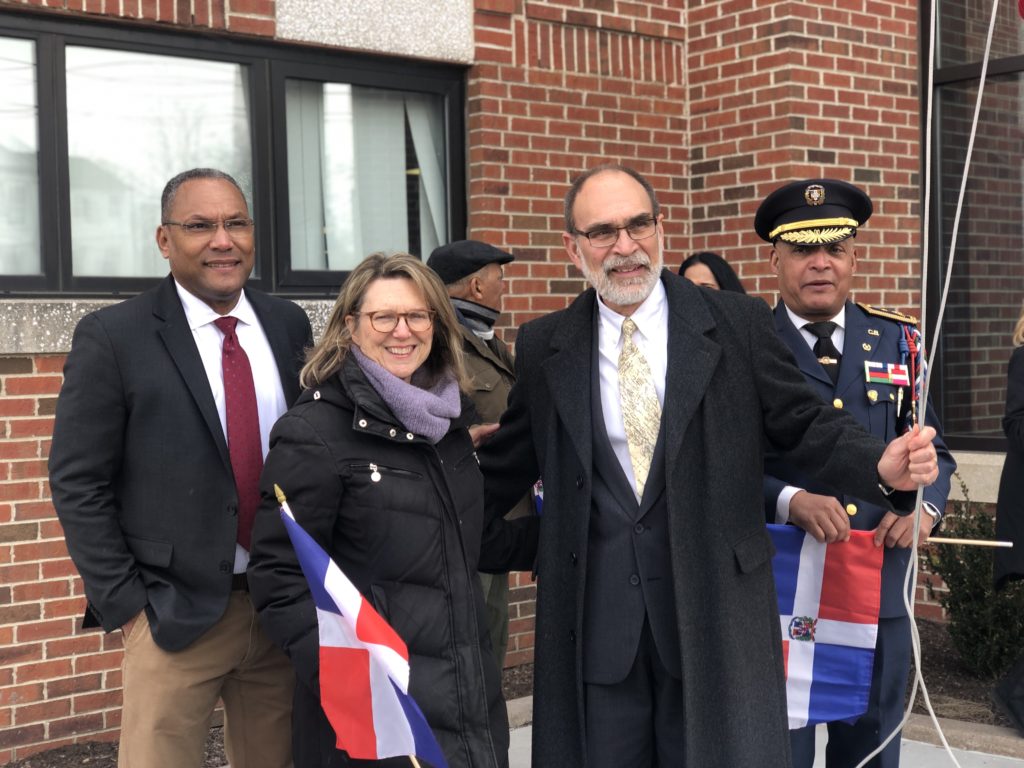 On February 26, under freezing temperatures, members of the Dominican community in Danbury gathered at City Hall alongside municipal and state leaders to raise the Dominican Flag in celebration of the 175th anniversary of their country’s independence.

The ceremony began with the U.S. and Dominican flags being raised to the sounds of the two countries’ anthems, fervently sung by attendees. The ceremony was then moved to the city council chambers, where dignitaries spoke of the contributions of the Dominican community.

“I am proud of the contributions of our local Dominican community, and the work we have done together. You can continue to count with my support,” said Mayor Mark Boughton.

Boughton also honored a distinguished member of the Dominican community as “Mayor For a Day.” This year’s honoree was Dr. Jose F. Henriquez.

Dr. Henriquez graduated from Merrimack College and earned his medical degree from UNPHU-Santo Domingo. He is Board Certified in Obstetrics and Gynecology and has practiced at Candlewood Center for Women’s Health since 1987.

Before gaining independence, the Dominican Republic experienced an unstable history of occupation by Spain, France and Haiti.

In the 17th century, the Spanish were forced to surrender the western part of the island, known as today as Haiti, to the French in 1697 and the rest of the island a century later in 1795.

However, in 1822, Haiti conquered the entire island and ruled for 22 gruesome years. During the Haitian occupation, Juan Pablo Duarte from Santo Domingo created a secret society named “La Trinitaria” and planned a coup against the Haitian rulers.

On February 27, 1844, Juan Pablo Duarte and the rest of “La Trinitaria” successfully established the Dominican Republic’s independence as a sovereign state with a cannon shot from the “Puerta del Conde” in Santo Domingo and the raising of the Dominican blue, red and white flag.