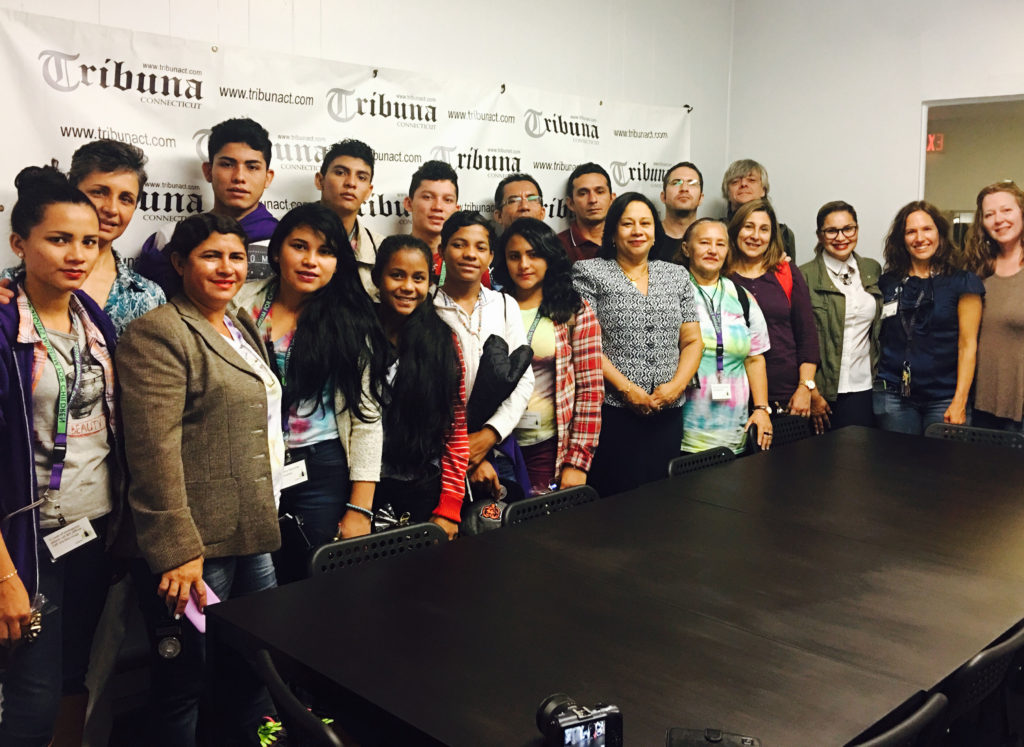 A delegation of eight teenaged students, of San Sebastian Community High School in Portel, at Caxiuanã Bay on the outskirts of Pará in Brazil, joined by their teachers and staff of the Museu Paraense Emílio Goeldi, participated in a 14-day exchange program with students at the Fairchild Wheeler Interdistrict Magnet Schools in Bridgeport.

Through Museums Connect, an initiative of the U.S. Department of State administered by the American Alliance of Museums, a partnership between Norwalk-based Stepping Stones Museum for Children and Museu Paraense Emílio Goeldi helps integrate Brazilian and American high school students through a grant program called “Lifelines/Aspectos Vitais: The Convergence of Arts, Ecology and Culture in the Amazon and New England.” Stepping Stones is supported by the Norwalk-based entities Creative Connections and The Maritime Aquarium.

In an international exploration of their respective watersheds to create an ecological, cultural and economic parallel between the two communities, American students visited the city of Belém in November of 2016 to study the Amazonian ecosystem. In April, it was the Brazilian students’ turn to study the Long Island Sound watershed in Norwalk.

According to Maria Emília Sales, Museu Goeldi’s Extension and Communication Coordinator, project LifeLines was a terrific experience for both cultures.

“The cross-cultural exchange was wonderful for both American and Brazilian students because their reality is completely different,” said Sales.

From April 19 through May 2, the eight students and three teachers of the San Sebastian Community School, and three representatives from the Museu Paraense Emílio Goeldi, participated in several activities and workshops at the Fairchild Wheeler Interdistrict Magnet. They also studied the Long Island Sound ecosystem while on the Maritime Aquarium’s research vessel.

Stepping Stones took the delegation to the Hudson River, for walks in Central Park and to visit museums in New York City. In addition, they visited historic maritime communities on the Connecticut shoreline, and the city of Danbury.

On Saturday, May 29, Tribuna welcomed the students to Danbury by taking them for a walk through downtown, beginning at its newsroom, where they were greeted by Tribuna’s publisher and founder Celia Bacelar, Editor-In-Chief Emanuela Palmares and Translation Editor Angela Barbosa.

The second stop was the Public Library, where Maryellen C. DeJong, Community Relations Coordinator, described the language services provided to the community. From there, the group’s craving for delicious Brazilian food was satisfied at the Banana Brazil Restaurant, where they had lunch provided courtesy of restaurant owner Nilton Coelho. The last stop was The Danbury Museum and Historical Society, to learn about the rich story of Danbury immigrants, facilitated by Joretta Kilcourse, Friends of the Museum Board of Directors President.

Danbury was settled by colonists in 1685, when eight families moved from what are now Norwalk and Stamford, Connecticut. The Danbury area was then called Swampfield. The settlers, however, were immigrants from England and decided to pay homage to their own town and name it Danbury. These first families built eight houses, and after a century, there were 300.

During the American Revolution, on April 26, 1777, the British burned and looted the city. The central motto on the seal of the City of Danbury is Restituimus (Latin for “We have restored”), a reference to the destruction caused by the Loyalist army troops.

The first houses built after the American revolution are located on Main Street, near the Danbury Museum. John Rider and Mary Rider’s house, built in 1785, is still standing and it is part of the Museum tour. Rider, a carpenter responsible for building several houses on Main Street, had his workshop inside the house. The Rider family had nine children and all subsequent generations lived in the house until 1925.

The first hat store was stablished in Danbury by Zadoc Benedict in 1780. In 1800, Danbury produced 20,000 hats annually, more than in any other place in the United States. Through the growing mechanization of the process, annual production increase to 1.5 million. There were 30 hat factories in Danbury by 1887, and together, they manufactured about five million hats a year.

The turn of the century was the heyday of the hatting industry in Danbury, when it became known as the “Hat City” and the “Hatting Capitol of the World.” Its motto was “Danbury Crowns Them All.” But by the 1920s, the hat industry was in decline, and by 1923, only six manufacturers remained in Danbury.

After President John F. Kennedy appeared at his inauguration in public without a hat, it doomed the city’s hat industry. The city’s last major hat factory, owned by Stetson, closed in 1964. The last hat was made in Danbury in 1987, when a small factory owned by Stetson closed.

The Danbury Museum and Historical Society acquires, preserves, exhibits and interpret the heritage of the greater Danbury area for education, information and research.

Visit the Museum and learn about Danbury’s history. Tours of the historic buildings located on Main Street are offered on Saturdays, and group tours are available by appointment. For more information, visit the Museum’s website at info@danburymuseum.org.

A New Option Is Emerging in Danbury
Malloy Nominates Asian Pacific American, and a Portuguese American Judge to Appellate Court