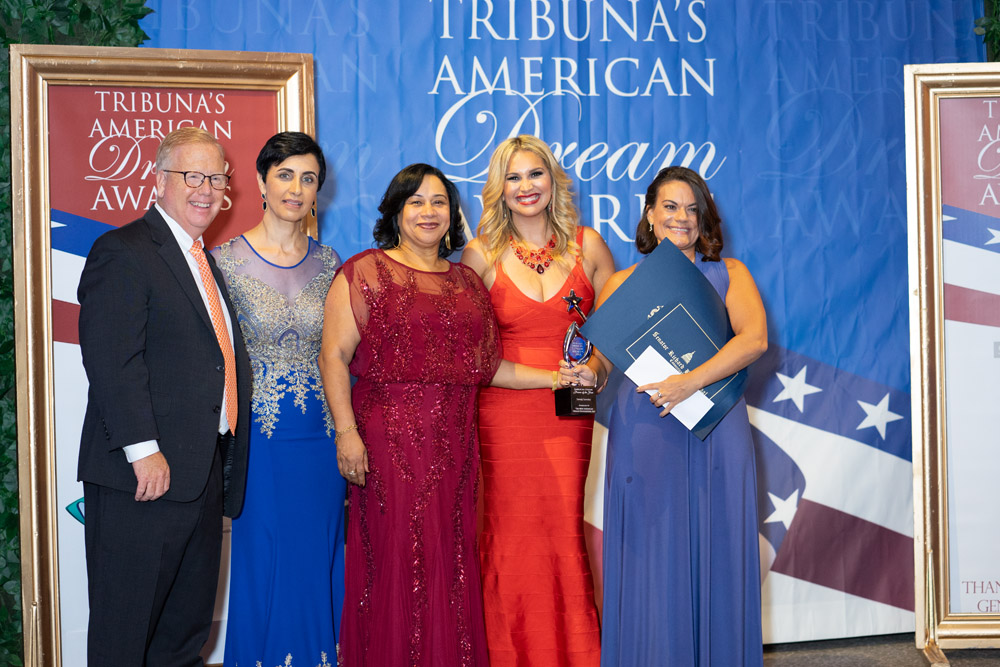 Mayor Mark Boughton and TNADF’s Vice-President, Emanuela Palmares, were the co-masters of ceremonies for the evening, marked by moving speeches and emotional videos of past recipients and the evening’s honorees, produced by RmediA of Danbury.

The program began with Danbury High School students, Mayra Ramirez, Benjamin Pereira and Keira Lane, under the guidance of Theatre Arts Teacher/Director Michael Burnett, reinterpreting “The Greatest Showman” song “A Million Dreams” from the perspective of the first immigrant family making the journey across the sea and arriving in Danbury, CT.

Over $10,000 in scholarships and awards were given during the American Dream Awards portion of the program. An additional $13,800 was raised from ticket sales towards Mission Health Day – a day of free health screenings and other community services for the uninsured and the income challenged, which will be hosted by Western Connecticut Health Network and Western Connecticut State University on October 13 from 9am-3pm at the Bill Williams Gym on the WCSU downtown campus.

Fifty-seven applications were received from nominees who were born in the United States, and others who migrated to our community, from 13 different countries.

Person of the Year

Students of the Year

The Veteran of the Year Award winner was Officer Hector Rodriguez, whose American Dream started twenty years ago when he had the opportunity to come to United States from his native country, Colombia. “I continued following my dream and after my military service, became a police officer. I wanted to give something back to this country that has given me so much – a country that I love and consider my own,” shared Rodriguez.

The Lifetime Achievement Award for the greatest success in one’s life was given to Mr. Peter Hearty, who arrived in the United States in 1963 from Ireland with his passport, a chest x-ray to prove he did not have tuberculosis, a suitcase and $50.00. Fifty-four years,  6 children and 13 grandchildren later, his definition of success and the American dream resonates with the millions of recent immigrants in America today,  “When I came to this country in 1963, I did have my own American Dream and found that with hard work, perseverance, some sweat and a sense of humor, that one could achieve whatever they put their mind to!”